I love Koreatown in the springtime…

Wherein I blog about all things Korean in Los Angeles

People are still landing on my blog by searching for hanbok (or 한복, although I’m not sure anyone’s ever gotten here by searching for it in Korean). So I owe it to a certain L.A. hanbok shop to put up this post FINALLY. Yes, this post is honestly 2-3 years late (maybe more), and my only excuse is life got in the way (and I’m a bad person :().

So here goes. I was personally invited to visit Lee Hwa Korean Traditional Dress Shop and see their hanbok and take photos. They were looking to get more exposure (clearly I was a bad choice for this). What I first noticed upon entering was the air of peace in the shop, and how beautiful it was.

The photo doesn’t do it justice. Lee Hwa KTDS (yes, I am way too lazy to type out “Korean Traditional Dress Shop” every time) is located on the second floor of a mini-mall on a busy corner, but once you’re inside you’d never know it. You’re surrounded by gorgeous fabrics, and it’s quiet, and there are flowers and plants. It’s like a sanctuary from the bustle of Los Angeles outside.

But the best part is, of course, the hanbok. Lee Hwa KTDS is family-run. Several generations of this family have been making hanbok. When you need to look traditional, they’ve got you covered.

But it doesn’t stop there. Lee Hwa KTDS also offers hanbok-inspired formalwear. It’s just as gorgeous as their traditional styles, and it picks up some of the same bright colors (except when it goes for a pure white), but it’s more modern in appearance, and yet it’s got a little je ne sais quoi (I should be saying that in Korean) that makes you think of hanbok. You could wear this to a formal occasion and look amazing. I’m not someone who needs a lot of formalwear (read: none), but I can appreciate that these dresses would make a splash (I promise Lee Hwa KTDS isn’t paying me to plug their shop). Take a look:

As you can see, I took full advantage of the chance to take photos. 😀

Edited to add: I just found out Lee Hwa has a website.

Comments Off on We shop for hanbok again, but hanbok isn’t all we find!

For those who don’t know, hanbok (한복) is the Korean traditional costume, which women still wear occasionally, particularly for special occasions such as a funeral or their daughter’s engagement party (please note my knowledge of when hanbok is worn comes chiefly from watching kdramas). Recently I had the chance to visit a shop that sells hanbok in LA. It’s located on Eighth St. across from Dong Il Jang. 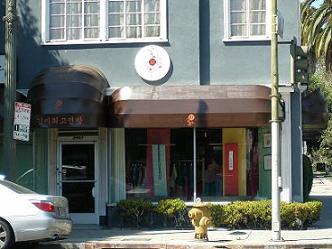 Of course, I knew there had to be places you could buy hanbok here, and I think there are actually quite a few shops that sell it, but this was the first time I’d noticed one. The shop wasn’t large, but it was brightly lit and showed off the various dresses nicely. I noticed mostly bright colors, didn’t see anything one would wear to a funeral. I admit I didn’t root through the racks in a big way, but everything I saw was stylish (er, if you can call something that’s centuries old stylish) and beautiful. There were some interesting color combinations, bright pinks paired with bright yellows, etc. You can see some of the shop’s offerings in the picture to the right.

I was asked not to take pictures inside the shop, or rather I explained to the shopkeeper in English that I wanted to take pictures and blog about her shop, and she explained to me in Korean that she would rather I didn’t take any pictures. Yes, we understood each other. Don’t ask me how. Let’s just say I’m good at context clues and gestures are a godsend.

We weren’t the only customers in the shop. In addition to us, there was a bored young man who was there with a young woman who was trying on hanbok. I forget what colors she had chosen, but I know why she was there: I heard something in Korean about an engagement. He got away with taking pics of her on his camera phone. Maybe if I hadn’t asked for permission I would’ve had better luck picture-wise. No, then I probably would have gotten in trouble. Oh, well.

P.S. I guess the place is called Kim Mi Hee’s Hanbok Shop, or at least I’m assuming 고전방 might translate as “hanbok shop” or “place to buy traditional clothes” or something like that. Like I said, it’s at 8th & Hobart across from Dong Il Jang (okay, I didn’t say it was at Hobart, but it is).